Stage 4a: The prolapsed or ‘slipped’ disc

It is important to recognise that a prolapsed or 'slipped' disc is essentially a degenerative spine disorder. It is one of the last straws with a bad back but it happens much less readily than you might think.

Healthy discs do not prolapse or 'slip' anywhere. For this reason, healthy backs have no reason to fear bending, nor that bending might cause a disc to pop or slip out. Indeed, on the contrary, bending keeps backs healthy.

True intervertebral disc prolapse is very rare - only between 3-5% of back problems. But when it does occur it happens like this: 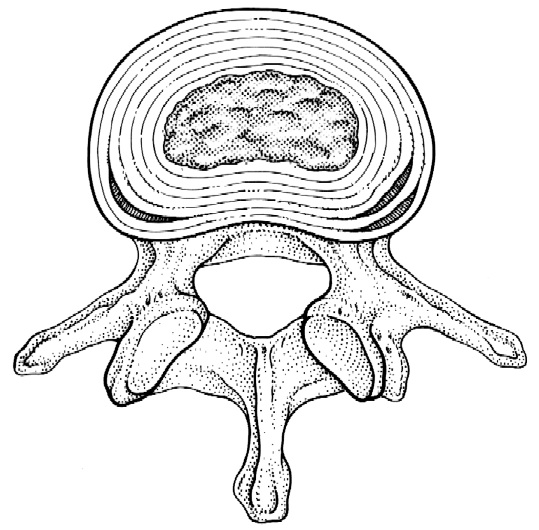 Bending and twisting activities cause greatest duress in the diagonal back corners of the disc, making the wall break up here first

As a disc progressively degenerates, the bubble-of-fluid nucleus at the centre gradually dries out. Instead of the disc having a buoyant internal hydrostatic forces to defray compression, it takes load through the multi-layered mesh of its disc wall. This is like settling a cement slab atop a wicker basket and it causes the wall to gradually break up. At the points of greatest duress—usually the left and right back corners - radial cracks or splits gradually open up from the inside out

As the nucleus dries out, it loses cohesion and is rendered expressible by the degenerative cascade. Excessive twisting and lifting activity can also force the runaway nucleus outwards through the inner cracks in the wall, with the pain from the pressure mounting as it approaches the very sensitive outer layers.

This pressure from within forcing a tense focal bulge in the disc wall can cause severe back pain. Sciatica (leg pain) can also be caused by the bulge from the displaced nucleus lodging on a nearby spinal nerve root.

This is the genesis of true prolapsed or 'slipped' disc. It is not the same as simple circumferential bulging of the disc wall, so commonplace on MRI, and caused by disc dehydration and loss of disc pressure. 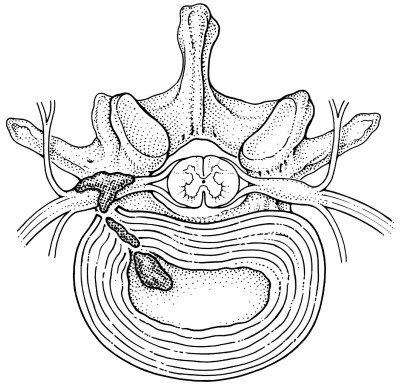 Stage 4b: The fenestrated disc

In rare instances, intense muscle spasm caused by internal pressure on the disc wall - or indeed by trouble at a neighbouring spinal level - can manage to make the above process, or complete disc bursting (fenestration) happen almost overnight.

The latter is a better outcome for the disc (like a boil bursting) as it relieves the pent-up pressure on the wall. The disc recovers quickly, courtesy of the excellent self-sealing properties of the wall, and the extruded disc material is absorbed by the blood stream within weeks. No need for surgery.