simplebackpain.com
Menu
You are here: Simple Back Pain Relief › Back Pain Exercises › Better Deadlifts To Avoid Back Pain

better deadlifts to avoid back pain 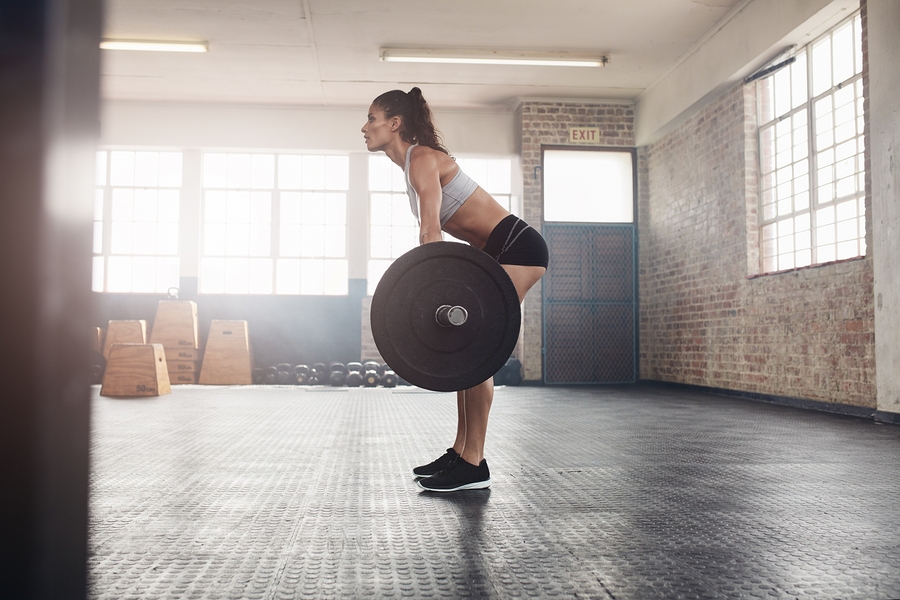 The biomechanics of better deadlifts to avoid back pain centre around spinal posture and putting the muscles and ligaments in best position. With top weightlifters lifting nearly 3 times body mass it's critically important to have maximum tension from the spinal ligaments and optimal line of pull from the muscles. Certainty in both these areas reduces the likelihood of segmental shear that brings the spine painfully undone.

In the page Back Pain with Deadlifts it was explained how intradiscal pressure plays a critical role in holding a spine stable.  The pressure within the intervertebral discs is greatly influenced by spinal postures. A lumbar spine in extension (arched) is less stable and more prone to mishap. A low back in neutral or slightly flexed prevents dangerous wobble of the segments that can cause a spine to buckle. 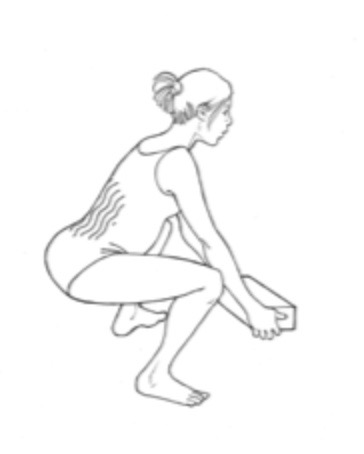 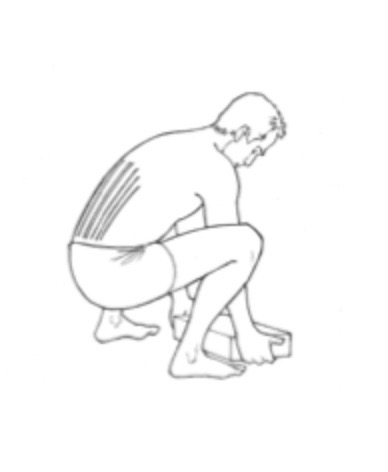 The spine's muscles and ligaments play a vitally important role in lifting. A low back in neutral or slightly flexed when lifting optimises the function of the core muscles and the stupendously powerful 'posterior ligamentous lock'. Conversely, an over arched lower back partially disables the ligamentous lock by shortening the lower back and putting these important soft-tissues on the slack.

The spinal ligaments of the low back are hugely powerful. Like all ligaments, they connect bone to bone and their strength is derived from their tension when pulled taut. The low back has six different sets of ligaments arranged in serried ranks from the outside in. 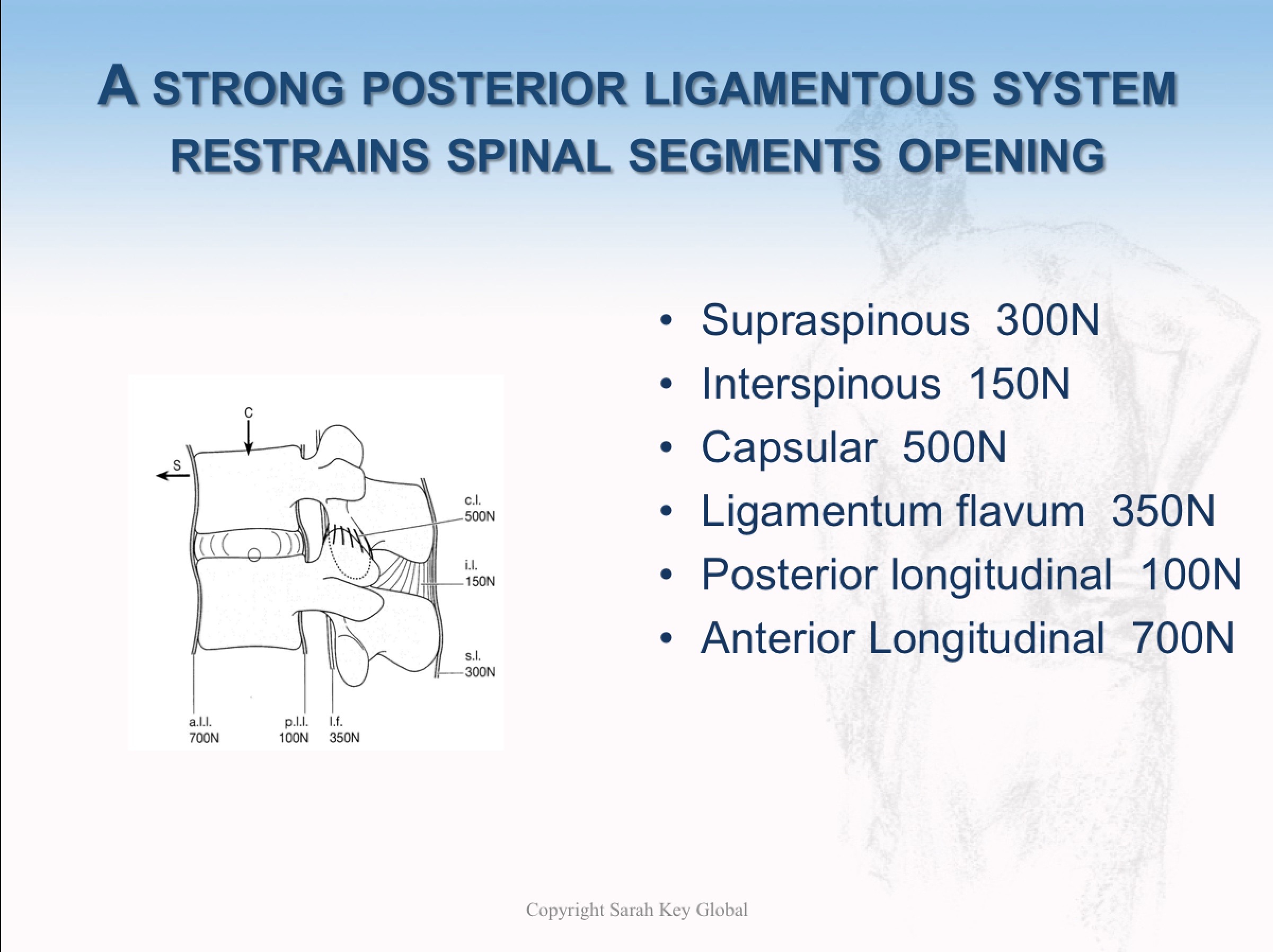 A ligament without tension is useless. The spinal ligaments derive their tension from being stretched around a rounded (and therefore longer) lower back. The graphic above also shows the anterior longitudinal ligament (far left) the only one restraining the much less useful backward bending action that we rarely employ (except going under the limbo bar!). 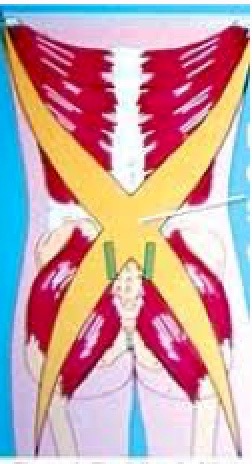 The strongest and most superficial (near the surface) ligament is super-ligament, the 'X' shaped thoraco-lumbar fascia, shown above. The upper flanks of the fascia are tensioned by the strongest arm muscles (latissimus dorsi) and the lower ends by the strongest leg muscles (gluteus maximus). The deepest abdominal muscle (transversus abdominis) tensions it laterally through the middle.

Strong abdominal or core muscles are an essential prerequisite for any type of weightlifting. They are particularly important in the biomechanics of better deadlifts because by pulling in the navel they pressurise the belly (intra abdominal pressure) and just as importantly, round the lower back. Conversely, over-active long spinal muscles arching the lower back make it difficult to switch on the abdominal muscles to pull the belly in. In effect, one cancels the other. 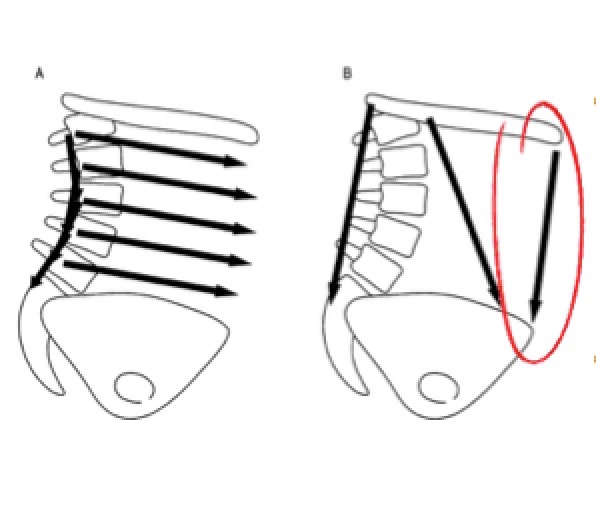 The widespread use of kidney belts in Olympic weightlifting illustrates the importance of a strong core. You will read in the page Best Exercises for The Lower Abs that strengthening the lower abdominal muscles is more preferable than going for six-pack strengthening (that largely targets the inefficient rectus abdominis). Stronger abdominals also make sure you don't have a mishap at the other end of the spectrum when doing any small incidental movement, such as picking up a coffee! 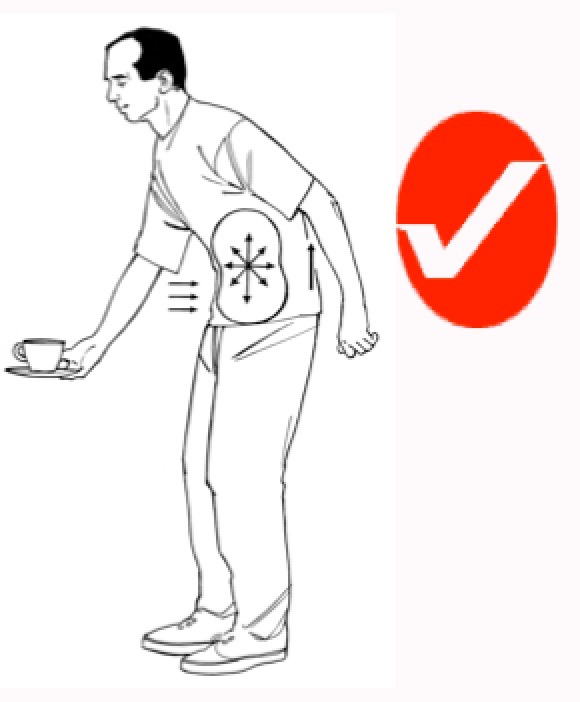 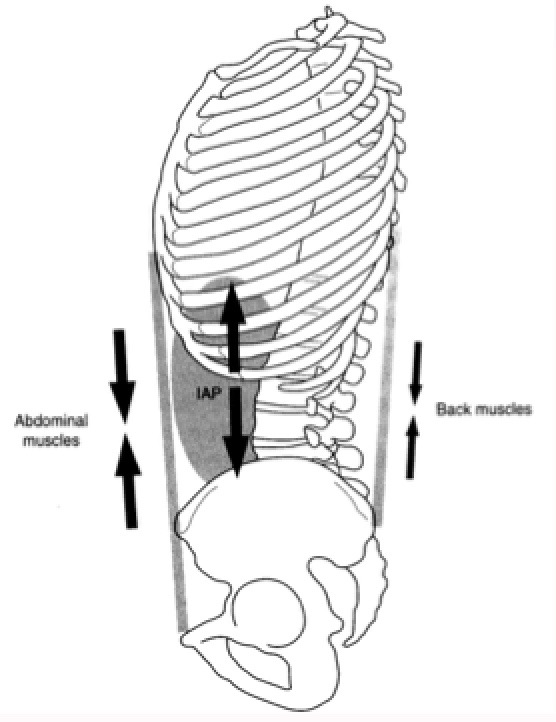 An important truism of muscle function is that over-activity of 'agonists' causes reflex under-activity of 'antagonists'. In this instance, overuse of the back extensors to arch the low back makes it difficult to switch on the abdominals - another reason why over arching deadlifts are likely to cause trouble. With a massive contraction of gluts and erector spinae it's almost impossible to pull the belly in. Here is another page on best lower abs exercises and worst abs exercises. 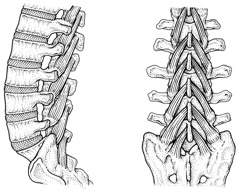 Multifidus is the all-important spine straightening muscle. If you try to straighten your back without it (let alone lift 2 to 3 times body weight) you are making things difficult and relying too much on the already dominant erector spinae, the long cable muscles.

Deadlifts tend to reinforce a faulty pattern when they use a bowstring action of the back and fail to unfold from a slightly bent posture to straight. This makes a hard job harder. With a low-back-arched-action hingeing at the hips you are literally lifting without the benefit of multifidus, the deep spinal muscle that unfurls the spine. Thus, you are lifting with one powerful group missing in action - and making the job that much more laboured. 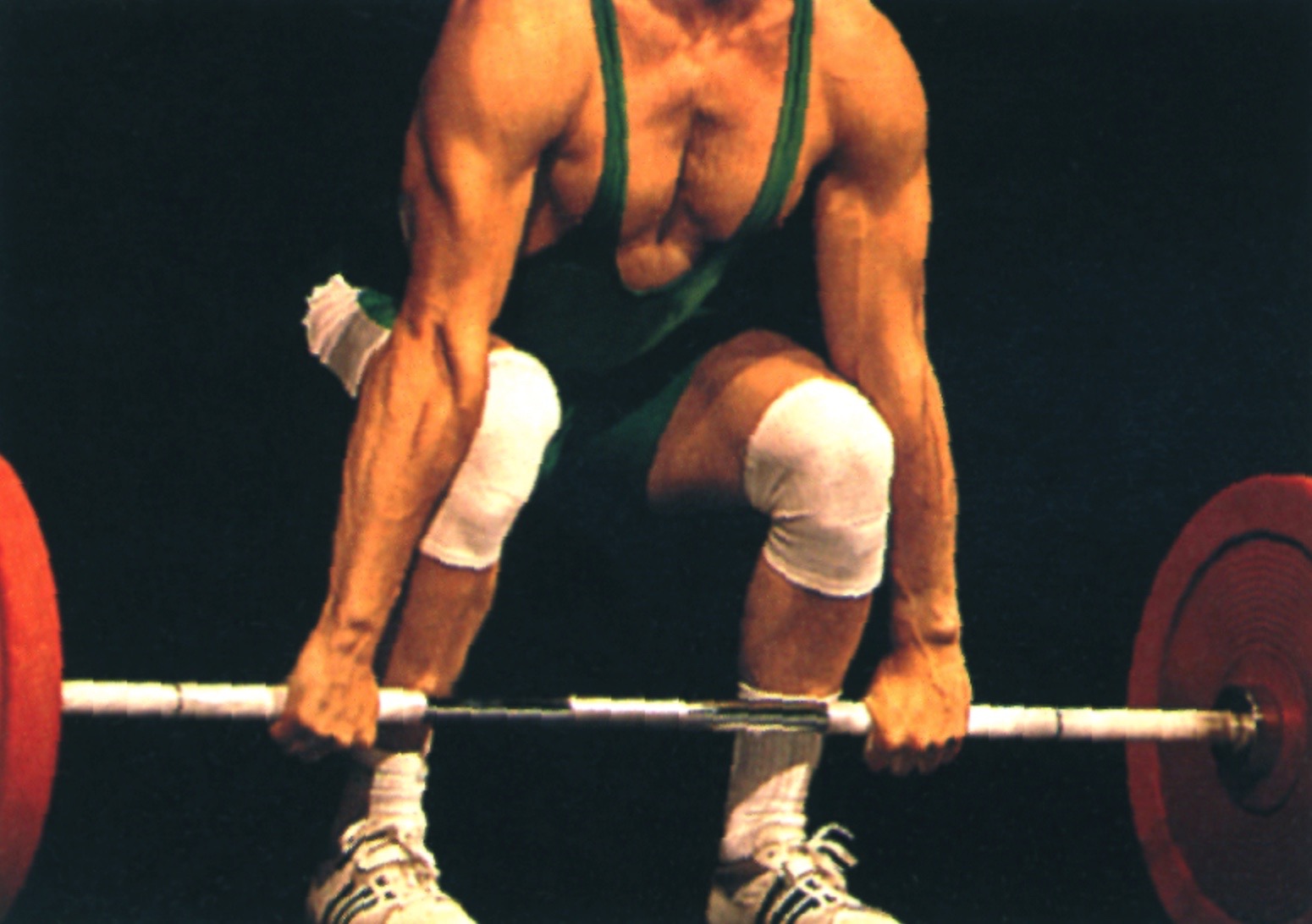 Deadlifting with an over-arched lower back causes a dangerous downward spiral into spinal instability. With the reflex switching off of both abdominal and deep spinal muscles an ever-increasing contraction of the long spinal muscles is invoked to hold the segments secure. This induces massive spinal compression which cannot be ameliorated by an adequate abdominal contraction to off load the vertebrae. The 'over strong' effect on the spine intensifies the cycle of breakdown, particularly at a level which has been previously hurt by a shearing strain.

The ultimate spinal strengthening to re-educate proper lifting biomechanics is the Grade 5 spinal intrinsics using the Roman Chair. However, there's a right way and a wrong way to do this exercise. For this reason it's a good idea to watch Sarah's video specifically focused on lower back strengthening. You can read more about this important video here. 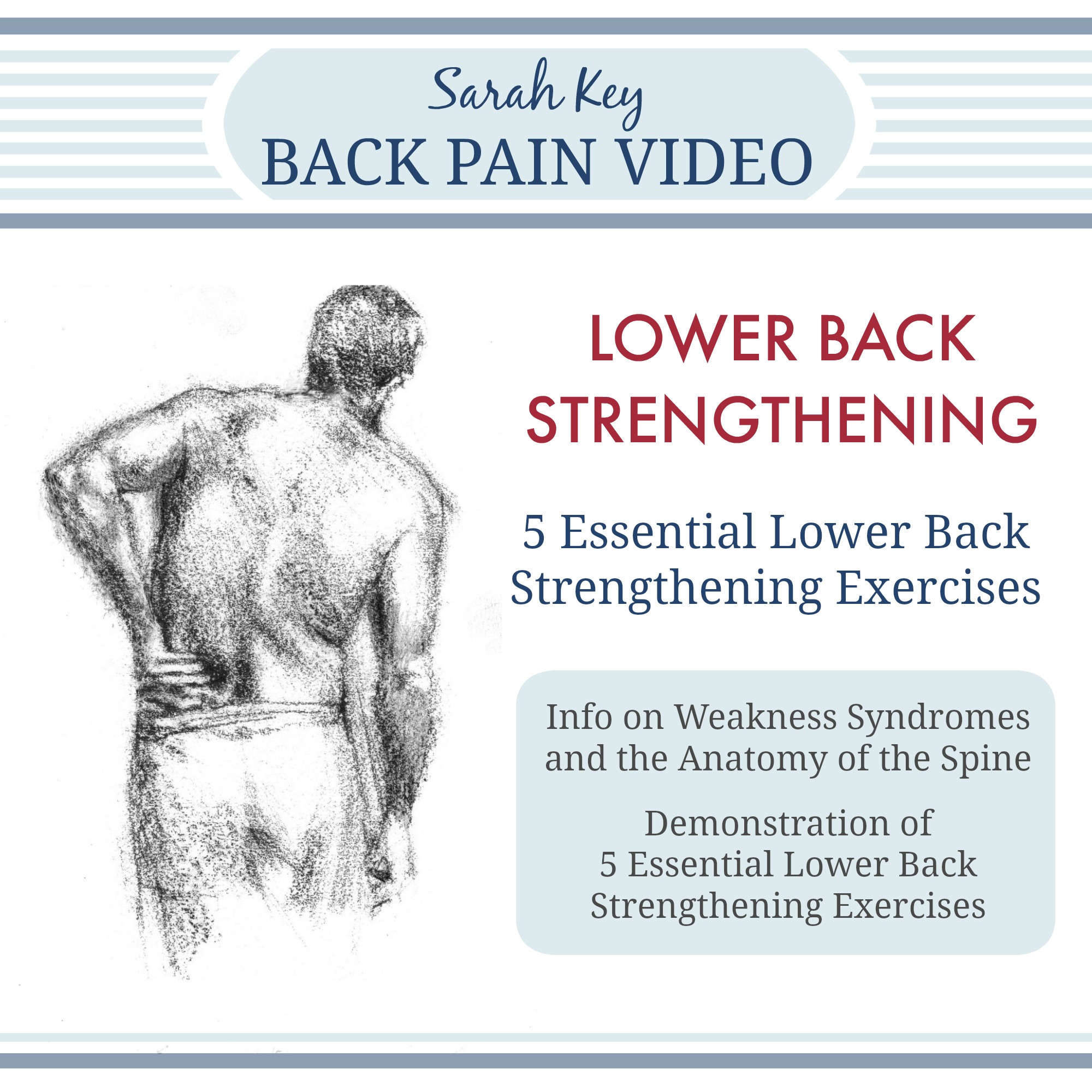 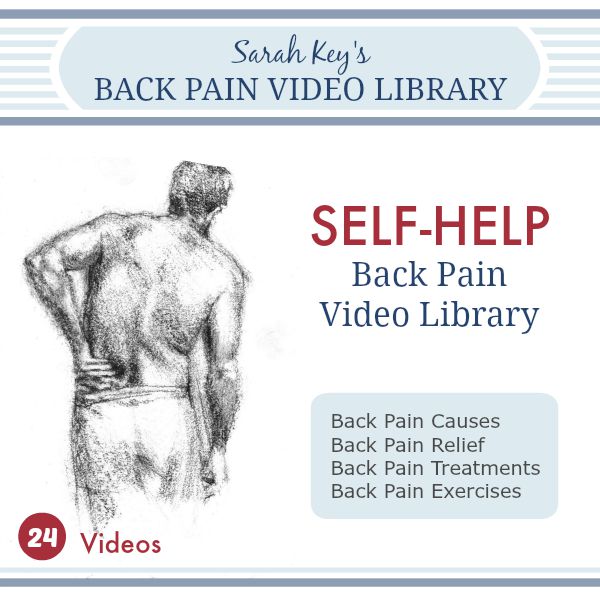