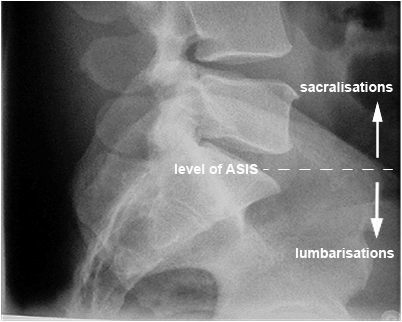 Malformations of the base of the spine and pelvis are very common, with variations too numerous to describe. Being the seat of spinal movement, these structural anomalies subtly influence the free-flowing function of the spine as a whole. The two main congenital disorders go by the name of lumbarisation and sacralisation.

In the 'modern' human skeleton the sacrum is a solid bony mass of 5 fused vertebrae at the back of the pelvis on which the upright spine sits. However, in earlier evolutionary forms the segments of the sacrum were not fused. They were free to move - like a tail - and participated as an extension of the spine in normal activity. 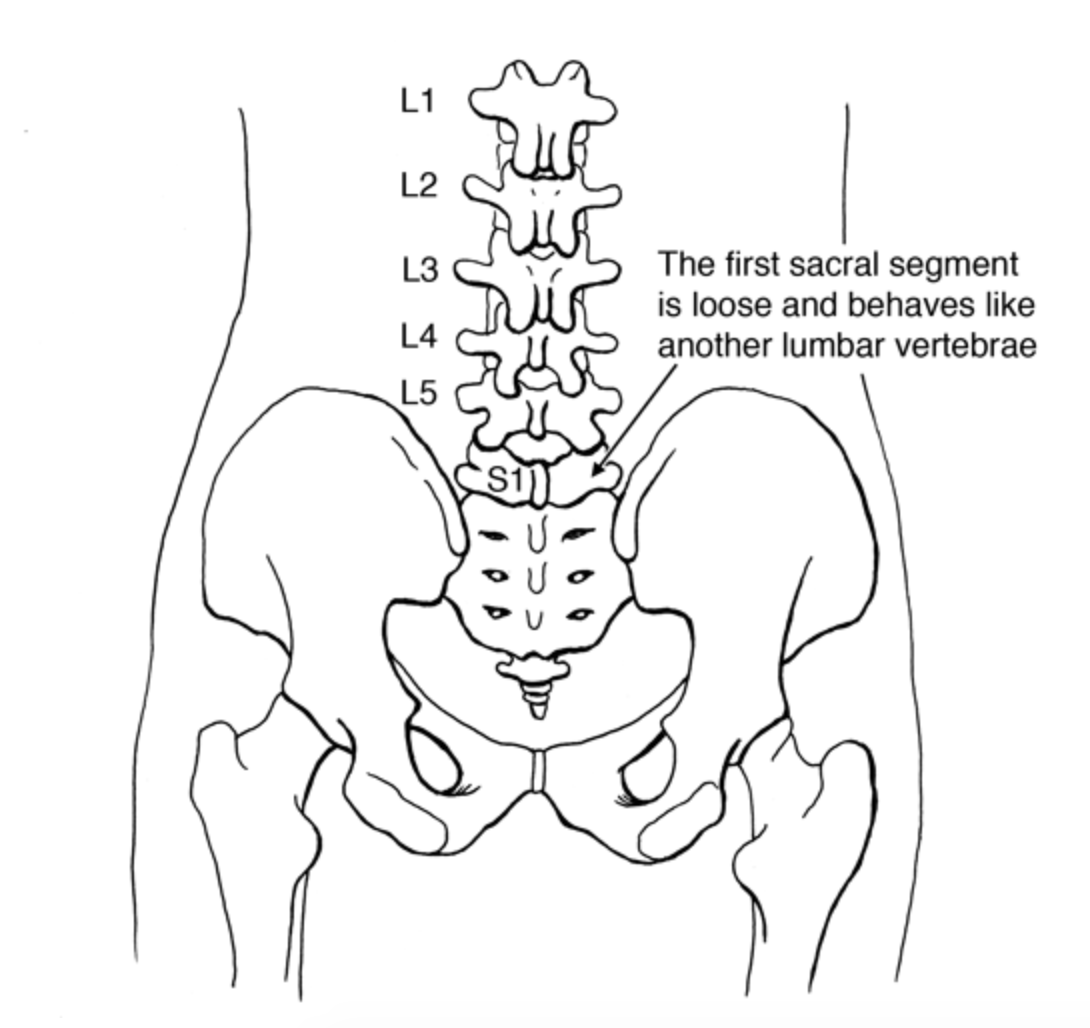 Lumbarization is where the first sacral segment is - at least partially - mobile instead of being part of the fused mass of the sacrum. It constitutes an 'extra' lumbar vertebra, often referred to as L6,

Lumbarization is where the uppermost segment of the sacrum is not fused. Rather it is free to move and participates, along with the neighbouring lumbar vertebrae in spinal activity. The first sacral segment is said to be lumbarised.

With lumbarization, anatomists and clinicians have taken to referring to this additional mobile lumbar segment as an 'extra' vertebra, which has led to some confusion in the minds of the patients. There is no extra vertebra jammed into the length of the spine, simply an extra mobile vertebra and one less fixed one. This may be referred to as L6. 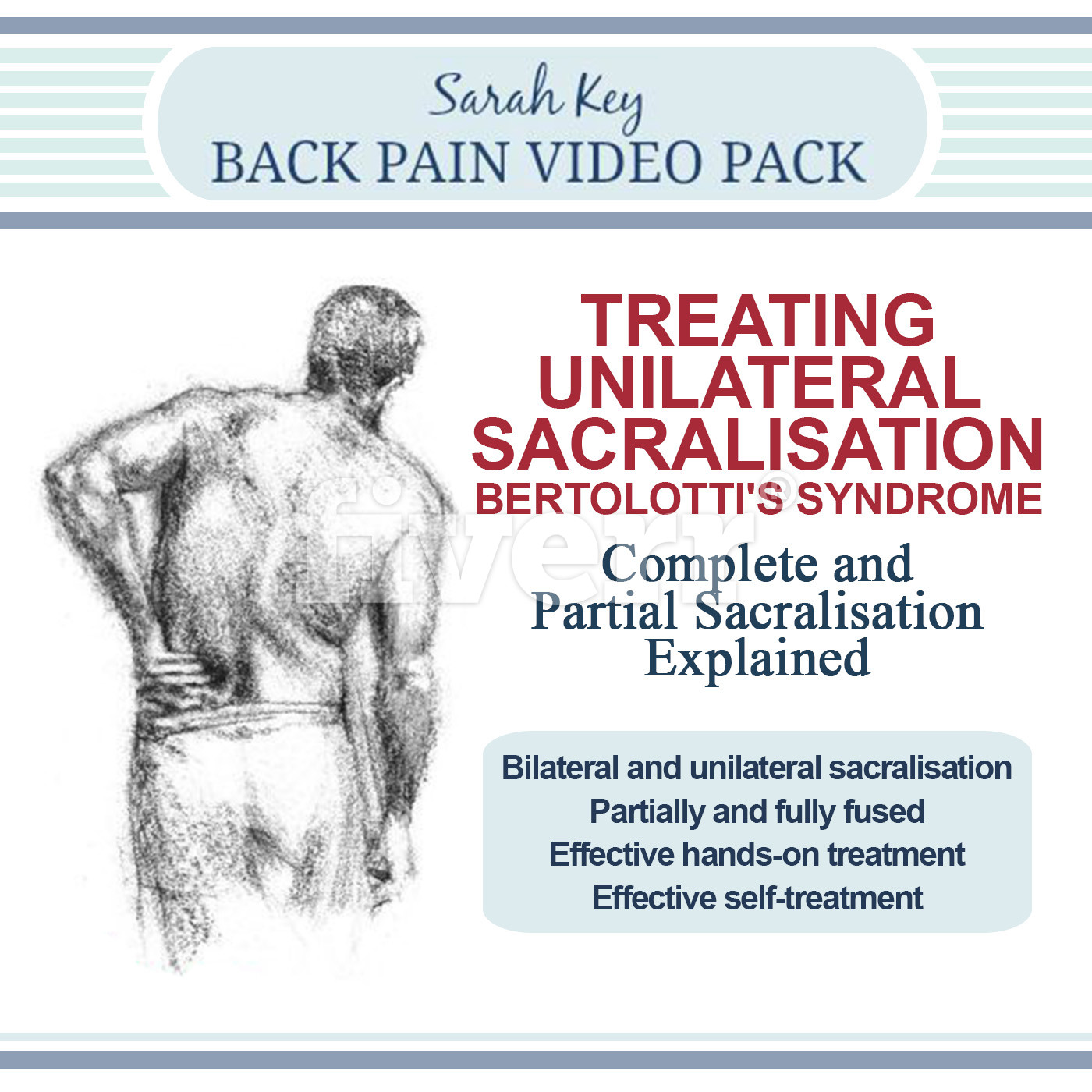 Sacralization is often described as having one fewer vertebra because the bottom lumbar segment (L5) is fused to the pelvis. It can either being fused to the sacrum below, or to the ilium at the side (the large ear-shaped bones of the pelvis) or both. Sacralisation with the sacrum can be termed central sacralisation, whereas to the sides it can be either uni- or bi-lateral transverse sacralisation. Being fused or semi-fused the L5 segment has more in common with its sacral neighbours than its (mobile) lumbar ones, hence it is said to be sacralised. 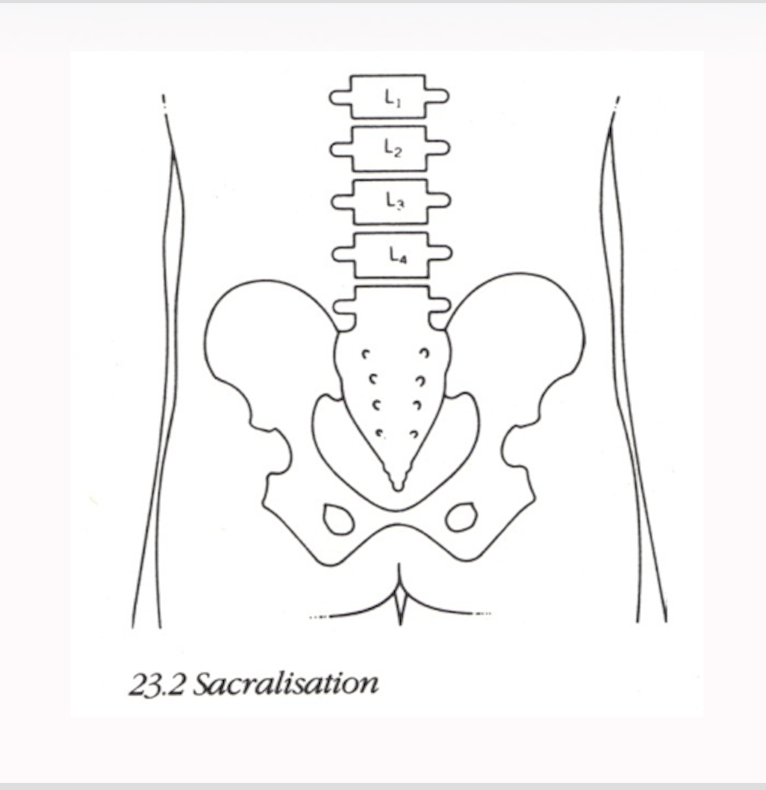 With central sacralisation the vertebra may be solidly fused or there may be a slight degree of movement through the presence of a vestigeal L5 disc. It is well possible to get to advanced years being completely unaware that you have one less vertebra. Problems may only come to the fore when fitness levels diminish, particularly the strength of the abdominal muscles. 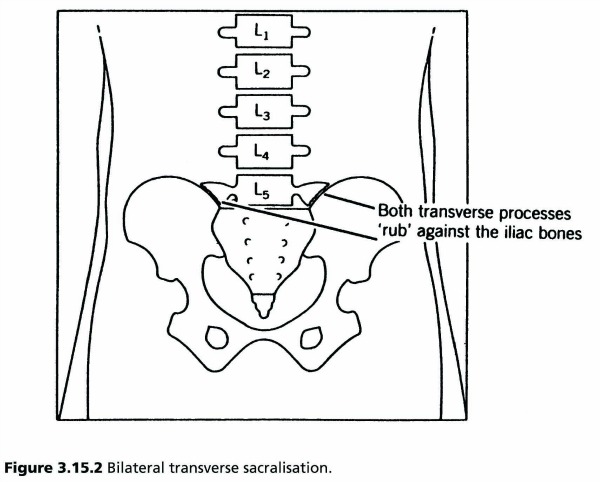 Bilateral sacralisation usually occurs through enlarged transverse processes either articulating with the pelvis, or fusing to it. 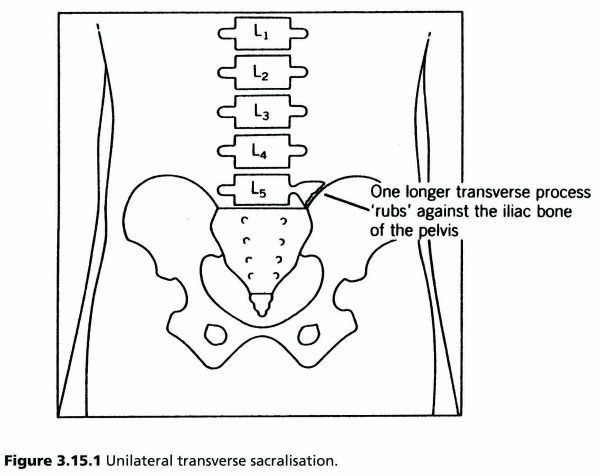 Just to confuse matters, the vertebra in question is often not fused all the way across. It may be fused on one side but not the other. Its participation with spinal movement on one side only makes for very wonky movement and the other working lumbar links above have to cope with that. Where strain sets in there will be pain, often higher up the spine (see below).

what problems do lumbarization and sacralization cause?

It has always been assumed that congenital sacralization and lumbarization are clinically unimportant, but this may not be the case. Generally speaking, both anomalies of the sacrum and base of spine cause trouble, usually because of the incomplete nature of each. With lumbarisation, it is rare for this additional joint to be completely free. With sacralisation it's rare for it to be totally fused. The pure extreme of both is rarely found, rather a No Man’s Land in between. 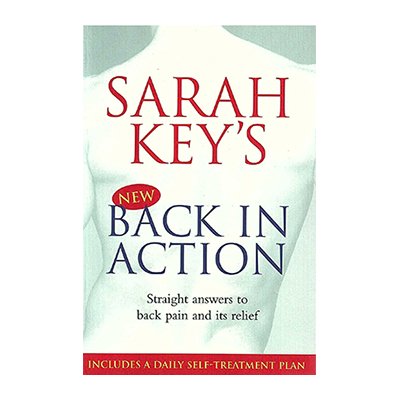 Read more about this book

Readers' Reviews of Back in Action

BUY Back In Action

Sarah Key's iconic book, in print since 1986, discusses this topic in the section 'Do I Have An Extra Vertebra?'

The same is true of spines that are sacralised at the fifth lumbar segment. Although this segment is said to be mobile, in truth it's not usually free enough. Again this joint is neither fish nor fowl, and struggles to be part of everyday function of the spine. Invariably, this not-quite joint is not up to the task. Furthermore, its debility becomes more obvious with advancing years.

Broadly speaking, a partially sacralised joint (with a some degree of movement) is more likely to develop symptoms, whereas a fully sacralised joint (that is fully fused) is usually pain-free but causes symptoms elsewhere at other joints - centrally at the level above and contra-laterally at both the same level and higher levels throughout the lumbar spine. This is described more fully below.

What is Bertolotti's Syndrome (BS) ?

Bertolotti's syndrome is low back pain caused by unilateral partial sacralisation where a pseudarthrosis, or developmental joint,  forms when a transverse process of L5 nudges permanently up against the bone of the pelvis.  The pain of BS is typically one-sided and felt where there is a 'bony hardness' at the top of the back of the pelvis. 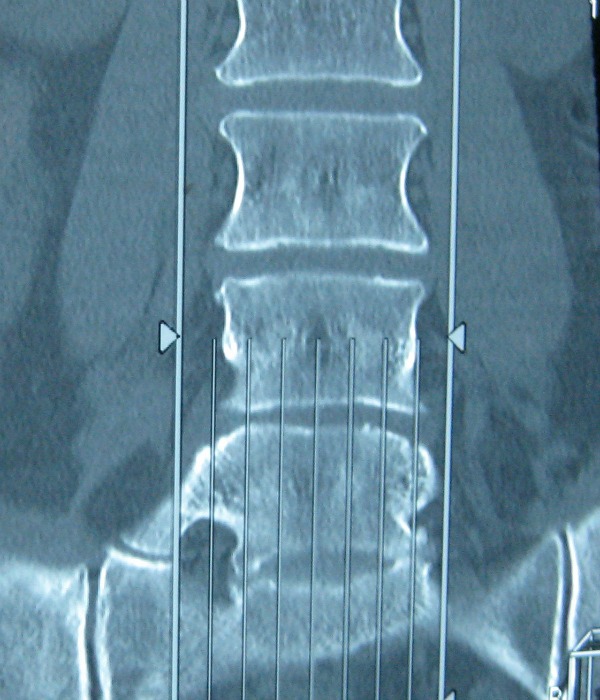 The pseudarthrosis develops where there is rubbing contact of the transverse process against the pelvis/sacrum. In another example of the miracle of the human body, it is complete with articular cartilage covering the bone and a joint capsule. For the most part, and certainly through youthful years, the pseudarthrosis  spares the body feeling pain, but with age, excessive sitting, high-impact sporting activities,  or a hyperextension injury, the joint  may become painful.  A high percentage if patients with unilateral sacralisatiuon develop degenerative disc disease at L5 and the L4 level above, caused by errant biomechanical forces through the spine at these levels. 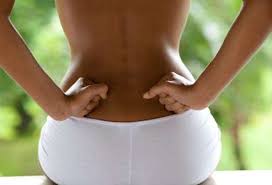 Other problems Associated with sacralisation

Full-fusion unilateral sacralisation of the bottom lumbar segment has several knock-on effects. The first is excessive movement strain of the pseudarthrosis on the contralateral side. One treatment option is to surgically fuse the pseaudarthrosis (see below) although conservative mobilising and self-treatment techniques to make the false joint work better should be tried exhaustively first. 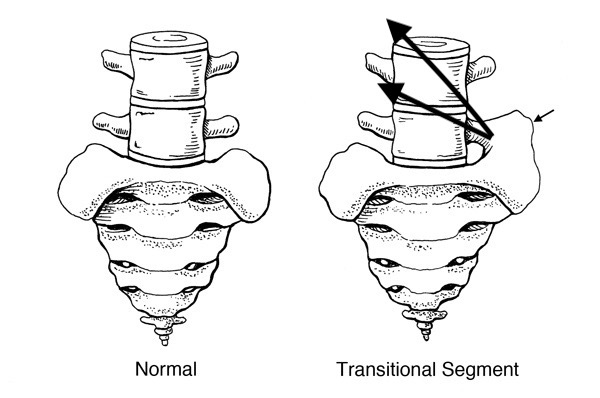 Unilateral sacralisation also tends to cause problems in the upper lumbar spine on the contralateral side. Typically, there are problems of the L2-3 spinal segment, usually involving the facet joint as well. The reason for this is not straightforward, although likely to be to do with the normal torque of functional spinal movement combined with the jarring strains on heel strike reverberating left and right through the spine on the way up. 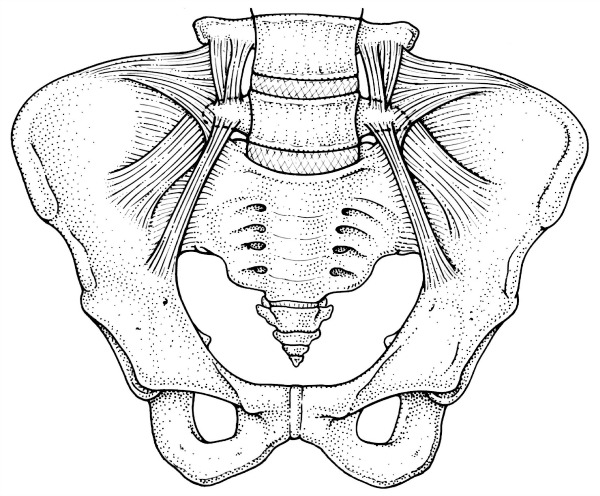 Full fusion bilateral sacralisation commonly causes degenerative breakdown of the L4 disc above, related to the altered centre of gravity of the base of the spine. With the L5 fused to the sacrum, the seat of spinal movement is raised. L4 - the 'new' spinal base - lacks the secure shoring afforded L5 and this can lead overuse syndrome and developmental  instability of the L4 segment.

Normally, L5 sitting on the sacrum means the spine originates deep within the pelvis where it is firmly anchored by a three-dimensional array of very strong ligaments. The dense strands of the stellate (star-shaped) ligament fan out either side in robust semi-circles from the fifth lumbar vertebra to various parts of the the inner pelvic bones, lashing the spine securely to the sacral table. 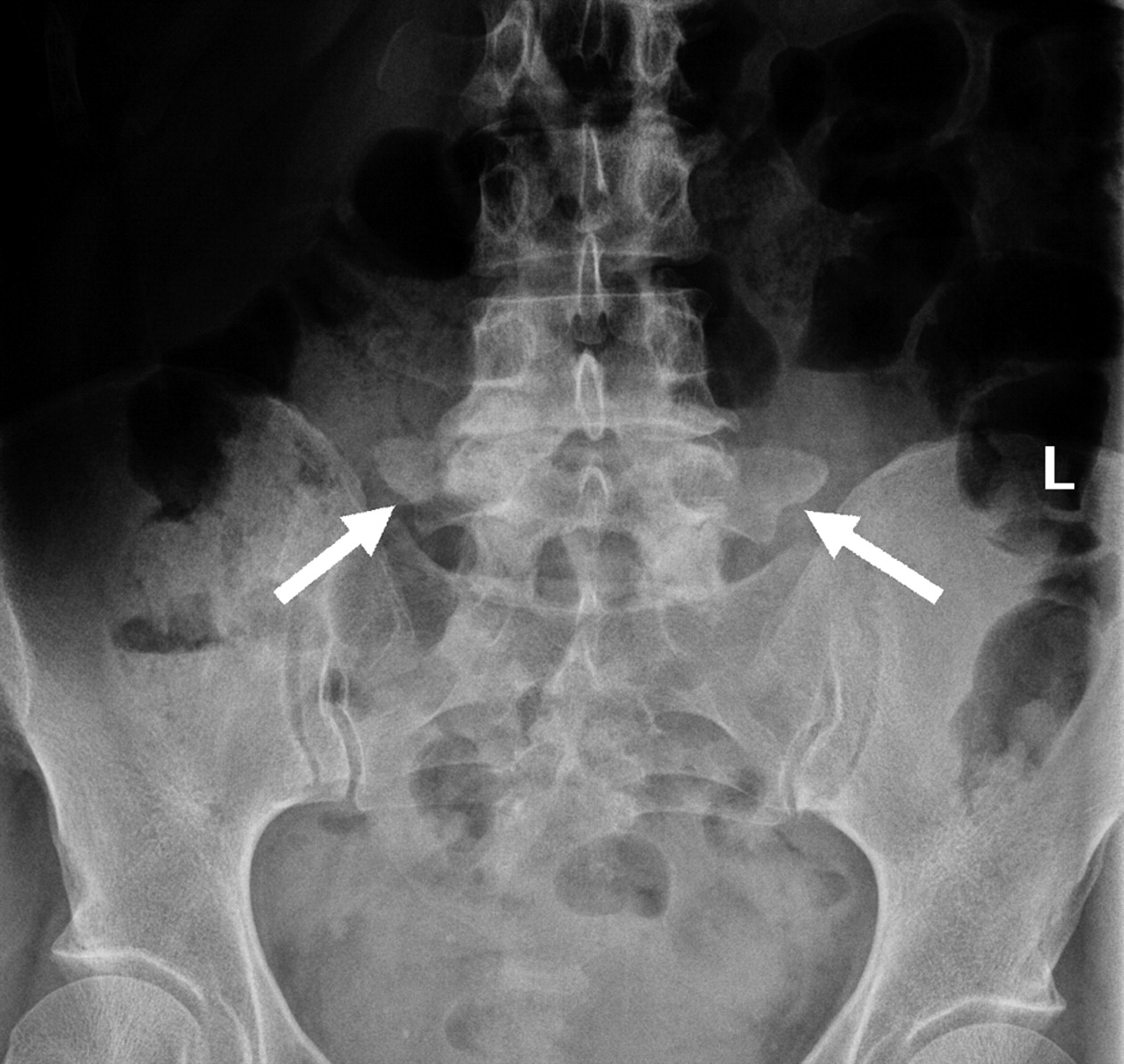 For these reasons, treatment for lumbar sacralisation must always involve strengthening exercises of the muscles both front and back of the spine. The spinal intrinsic muscles (multifidus) must be re-educated to bolster the bending strength of L4 as the raised seat of spinal movement and you can see here about spinal strengthening and the Roman Chair. At the same time, stronger abdominal muscles help create a stronger retaining wall at the front. You can read all about the best abs exercises for bad backs here.

Want to Treat Your Bertolloti's Syndrome Yourself? 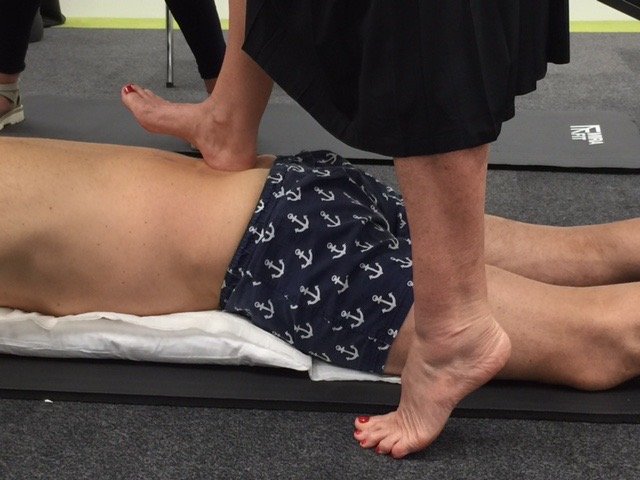 Why Not Learn By video instead of reading?

You may also like to see Sarah Key on video showing what you can do yourself. Whatever the pictures say, you need to be making your spine like it used to be; more plastic and compliant. See Sarah demonstrate how to decompress the spine, making the not-quite joints in your back work better. Yes, it really is as simple as that! See the  Complete Back Pain Video Package 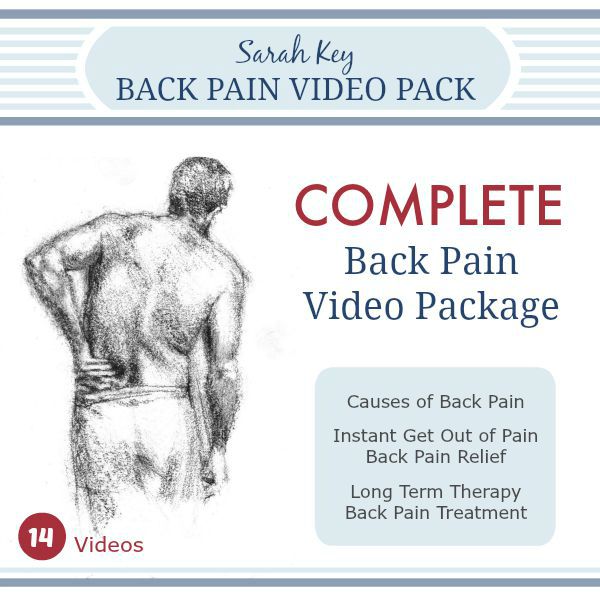