why the back block works 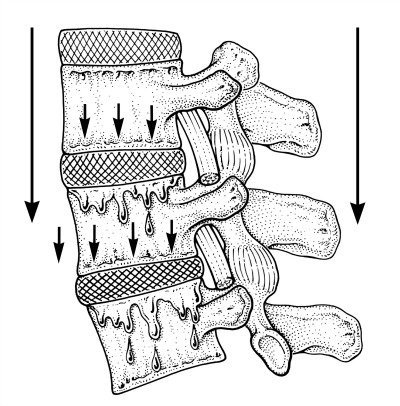 Discs lose 20% of their discal fluid throughout the day, with approximately 10% lost in the first 2 hours of sitting

Lying back, passively draped backwards over the BackBlock is especially effective at stretching the front of the discs. You may have heard me say before that the annulus fibrosis, the stuff that makes the thick, multi-layered mesh walls of the discs, is the 'toughest' structure in the human body. At the front of the discs, the annulus is reinforced in its toughness by the super-strong 'anterior longitudinal ligament', the strongest spinal ligament. So it's not surprising that both have a habit of adaptively shortening if they remain 'un-stretched' for any period of time.

The BackBlock puts the body into the classic 'anti-sitting' posture. It interrupts the de-stimulatory (read deadening) forces of sustained spinal compression

Lying back, passively draped backwards over the BackBlock is especially effective at stretching the front of the discs. You may have heard me say before that the annulus fibrosis, the stuff that makes the thick, multi-layered mesh walls of the discs, is the 'toughest' structure in the human body. At the front of the discs, the annulus is reinforced in its toughness by the super-strong 'anterior longitudinal ligament', the strongest spinal ligament. So it's not surprising that both have a habit of adaptively shortening if they remain 'un-stretched' for any period of time.

Apart from simply interrupting the 'disc squashing' pressures of sitting, the BackBlock is GREAT at pulling out long again these adaptively shortened structures. But, it means business - and it can feel quite dauntingly uncomfortable, especially the first few days.

You may like to read a review on Amazon.co.uk about The Back Sufferers' Pocket Guide

where a reader had great results but not without a fair modicum of early discomfort.


Being on the BackBlock actually feels like what the body needs

Strangely enough though, I believe it’s the very simple 'knees rocking' exercise that does some REAL heavy hitting in the PCT regime. I say this because it particularly addresses the much-traumatised back walls of the lumbar discs that have such a high maintenance load.

It seems such a simple exercise it’s hard to imagine you’re doing anything at all, but be comforted that you are. You will also see in the specific ‘spinal appeasing’ exercises that this exercise (together with spinal rolling) is the universal panacea in calming a spine that has gone into a painful crisis of lock-down mode. 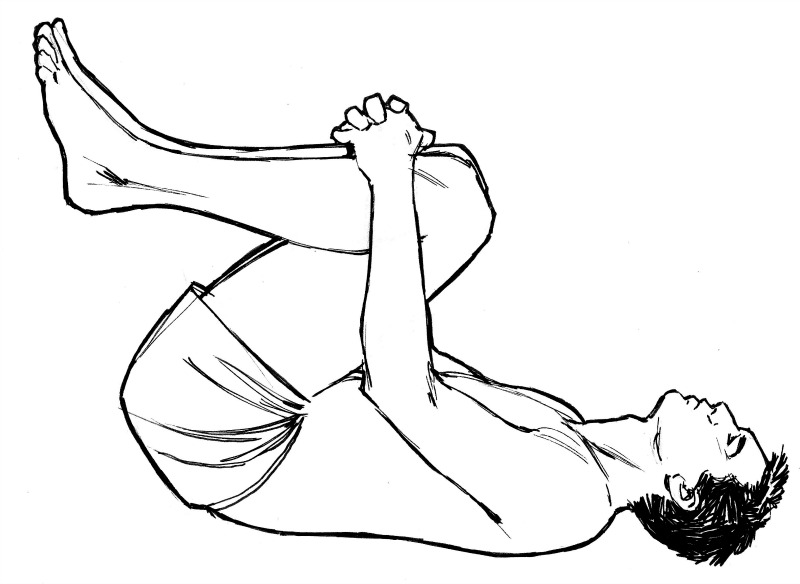 The knees rocking exercise, while compressing the front of the discs opens up the back and by creating a relative negative pressure, sucks fluid in through the back disc wall. In effect, this gives this part of the disc 'first use' of each fresh tide of nutrients coming in and provides the inside running on repairs and maintenance for this overworked part of the disc.

Unlike the front, the back of the disc wall (the posterior annulus) is very s-t-r-e-t-c-h-y. In fact, it stretches by up to 90% of its length, making it easier for the spinal segments to flare open at the back, so you can bend forward to tie up your shoelaces.

Very importantly, stretching the back wall of the disc also thins it, thus making what the scientists call a 'shortened diffusion pathway' for nutrients to cross. By this, they mean less of an obstruction or physical barrier for nutrients to squeeze through to keep the heart of the discs alive. In fact, the nucleus is always the first part of the disc to break down and it is precisely because of the difficulty of this critical journey. 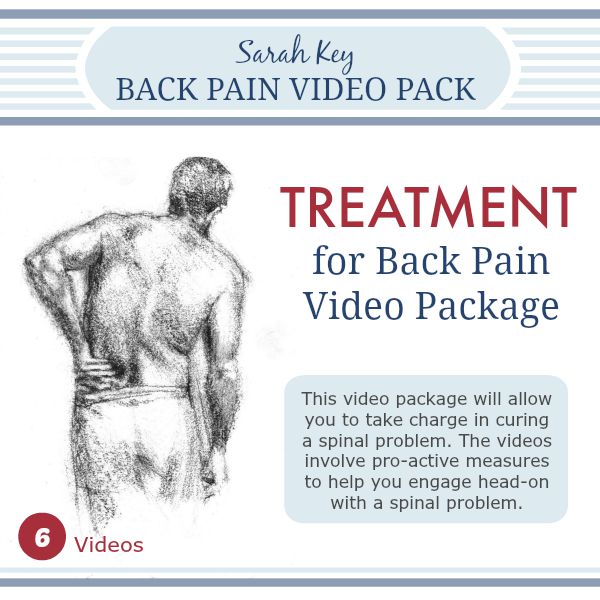 At the same time, the back disc wall's extraordinary ability to stretch also widens out the dense capillary network of fine blood vessels contained in the posterior longitudinal ligament running down the back of the discs. This ligamant actually blends intimately with the fibres of the disc wall itself, and in a sort of piggy-backing way, lends its blood vessels to the disc wall to help it survive. In this way, the disc wall is able to cope better with its high maintenance load begot of bending.

The lower graphic shows the back disc wall (grey right column) thinned by flexing, (below right) making it easier for nutrients to cross the diffusion barrier (Adams)

Because remember the forces of destruction on the back of the discs by bending are great. They are under constant duress, both from the fibre tension caused by the stretching (with all the stooped postures and slumped sitting) and the pressure from within, caused by the liquid nucleus being squidged backwards. Both factors cause micro-damage as they 'ping' fibres of the posterior annulus at a regular rate. This means that all lumbar discs are pretty well in constant need of running repairs.

The humble 'knees rocking' exercise I believe gives this much traumatised (and sensitive) back rim of the discs their best chance at repair. If you get the rate right in opening and closing the back of the discs, I believe you up the ante. Because if you do it in a way that is soporific, the muscles settle and let go more and you get a better influx and efflux of fluid. 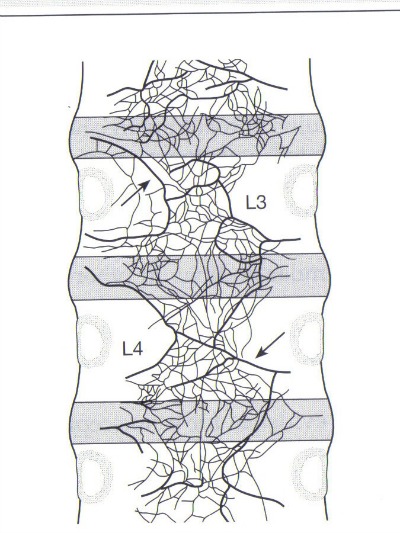 With so much talk about doing the BackBlock, results are what we're after.

Read the most recent feedback from a Survey Monkey appraisal of the Sarah Key Method. here, all unsolicited.